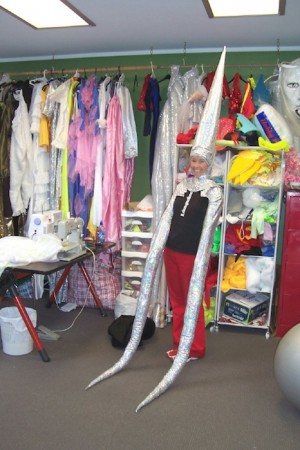 Originally from Christchurch, NZ, Emily Buttle spent ten years based in Amsterdam, The Netherlands, stiltwalking at hundreds of festivals and events and establishing EMPRESS Stiltdance. Emily is the founder, director, costume designer and also performed full time in all the acts. Since starting out solo in 1995, Emily developed EMPRESS into a company of highly skilled stilt performers presenting large-scale stiltwalking roving acts at a wide range of events in Europe, Australasia and internationally. These unique dancing characters have performed at hundreds of events and appeared in magazines, websites and newspapers all over the world.

Over the last twenty years EMPRESS has employed more than seventy performers and spanned three continents. The Netherlands branch, become one of Holland’s most loved stilt companies and ran for 15 years. In 2003 Emily explored the UK and started to reach an even wider audience, and in 2006 moved home to NZ, set up a branch in Melbourne, Australia with Jodie Foreman, and started creating the New Zealand company. At home in Wellington, Emily created work for national and international events whilst growing the company, and produced a number of new EMPRESS shows. Collaborating with other kiwi performance artists brought a new capacity for aerial work, directing and choreographic growth. Emily also started to create installation and decor design which had a unique and feminine aesthetic.

In 2010 Emily moved to Sydney, Australia. Since then Empress has performed at hundreds of local events as well as in Asia and the Middle East. The Empress collection comprises of over 100 unique one-off stilt costumes. Many of the designs have been replicated due to ongoing popularity. Currently Empress is based in both Melbourne and Sydney and continues to grow. All together EMPRESS offers high quality roving acts to a number of key events in Australia and internationally, whilst still presenting the popular stilt walk acts to local events.